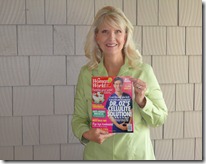 With no warning I became a mom of a military child. Over 15 years ago when my daughter, Erin joined the Air Force. My family was not a military family. My grandpa served in World War I, but he never really spoke about being the military. I was unfamiliar of what military life was all about.

Our daughter was in her second year of college when she came home from school that day and informed my husband she had joined the Air Force.  I was in shock!  I though she was stressed out from school. She was a child that did see everything in black and white. She use to get upset when kids in her class did not follow the rules!  I did remember when she was in grammar school at parent teacher conference the teacher informing me that Erin tested with high skills with following procedures and she did have difficulty seeing things in the grey area. This is why today she has been so successful in her career.

Erin reassured my husband and I that she had considered joining the military service when she was a freshman in high school, even though she never mentioned it to us. She searched all branches of the military and felt the Air Force was the one for her. I know there are many mothers just like myself, that have experienced their child’s sudden enlistment to the military. Its very surprising, and as a mother you have many mixed emotions. They are being responsible but, it’s their safety you are worried about.

But as a mother our job is  to support and encourage our children to follow their own dreams. And sometimes those dreams can be difficult for mothers, I know I had many concerns. I think we never really disconnect that umbilical  cord.

What can you say, when your child wants to be  being responsible, feels pride for our Country and wanted to protect the people of our Country.

Many things have changed over the years since our daughter  joined the Air Force. Our daughter married, had two children, moved 5 times, our Country went to War, she divorced, deployed to Afghanistan, remarried and will redeploy this fall. Here is her picture when she was informed of her  promotion to Master Sergeant. We as a family are so proud of her.

It’s been an interesting journey having our daughter in the military. My husband and I have faced many challenges and during those those times we have experienced some of the most rewarding times of our lives.

I hope those military moms out there know how much their children truly appreciate their support. My daughter tells me all the time. we all know military life can be very stressful for everyone concerned, but when it’s you calling you must follow your heart.

Cheers to my fellow military moms!

We are the Force behind our Force.

My husband Alan and I  had the honor to meet many supporting military  families at the Yellow Ribbon event for the deployed Army Reserves.  I loved hearing their personal stories of what their family experiences have been with their deployments. Each story is unique and touches my heart, and we all have a common ground. Trying to cope with what you have been dealt, and attempting to achieve a positive outlook and experience.

I know our personal situation with deployment was challenging, with being a parents to our granddaughters. Each family had a special story.

One families’ story I think stuck out in my mind that day. A woman shared with  Alan and I that her husband was currently deployed, for the past  year. While her husband was deployed, just four  months ago, she became the guardians of her Army Reserves daughter’s three children, ages -16, 10 and 6. She and her husband had downsized to a smaller home, a 1 bedroom and a loft, 10 years ago. She lives relatively  close to her daughter’s home. She felt she wanted to provide her grandchildren a familiar surroundings and a normal routine. She felt this would help them during  their mother’s deployment. The kids  get ready for school at their own home, and after school they would  return  to complete their homework. They all ate dinner together, then they would  gather  their belongings and sleep at their grandmother’s house. She felt she needed to sleep in her own bed. She shared with us the challenges of balancing the two households, children’s activates and her daily routine.

She is alone, facing all the mixed emotions and duties of her new responsibilities. When her husband returns, he will be able to help her in a few months. But in the meanwhile it’s all up to her.

I asked her how the children were dealing with this. She explained that the youngest child was convinced their mother would not return home safely. And they were fearful of anything happening to her, since she was the only one there for them. She was concerned and recognized the children’s  mental health was an issue. She sought out counseling to help the children and herself. I give her credit for reaching out for help. The military provides exceptional counseling for families dealing with all sorts of issues. I give her credit, for recognizing they all needed help!

I shared with her the website and my email, encouraging her to keep me posted on her progress, and if  she needed a shoulder to lean on,I was there for her. Knowing you have others that are or have been  in  the same situation is so gratifying. Knowing others  have come through deployment, makes all the difference in the world.

I am  proud to know other deployed families, and their commitment to sacrificing their lifestyle and making a difference for their family, doing what ever it takes for the family.  Cheers to those families!

We are the Force behind Our Force!